We raise sheep…After much debate, we decided to raise sheep because of their size, quality of meat, water available on the farm, and acreage we had. The Naivar Family Farm has housed all kinds of farm and wild animals but we decided to raise Dorper sheep and got handed a registered miniature Cheviot ram. In turn we now have the largest herd of Cheviots in Texas – 6 registered minis!

The Dorper sheep breed is a mix of the Dorset and Persian – originally created for the South African meat market. It is a hair sheep – no need to sheer. They do well in Texas.

The white Dorper is beautiful and has a more mild temperament. The black headed Dorpers are bolder and more “wild”. Both are great overall.

The miniature Cheviot is not really a mini. It has actually been bred larger since it first introduction to the U.S. market but they are a smaller pure breed from the Cheviot Hills of the United Kingdom. They are a beautiful, hardy sheep with wool and meat products.

The Dorper is a South African breed of domestic sheep developed by crossing Dorset Horn and the Blackhead Persian sheep. The breed was created through the efforts of the South African Department of Agriculture around the 1930s to breed a meat sheep suitable to the more arid regions of the country. (wikipedia)

The Dorper is an easy-care animal that produces a short, light coat of wool and hair that is shed in late spring and summer. Not all dorpers shed well – some require owners to pull the hair off. Many breeders select for the shedding trait.

Rams reach sexual maturity at an early age; rams have been observed to start working by five months. Many lamb rams that are not castrated will begin sexual behaviors after one week of age. 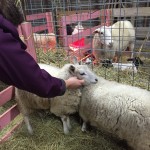 The Cheviot is a breed of white faced sheep which gets its name from the Cheviot hills in north Northumberland and the Scottish Borders of the United Kingdom.

The Cheviot is a dual-purpose breed being raised primarily for meat and wool. (wikipedia)

Cheviots produce fast-maturing, lean prime lambs. Their active nature means they put on muscle, not fat, and they have a high dressing percentage. The distinctive high shoulder, which gives them agility and suitability for hilly terrain, is light in bone and fat, and heavy in muscle. The rapid growth rate and fast maturity of Cheviot lambs means earlier sales, fewer carryovers and higher returns.